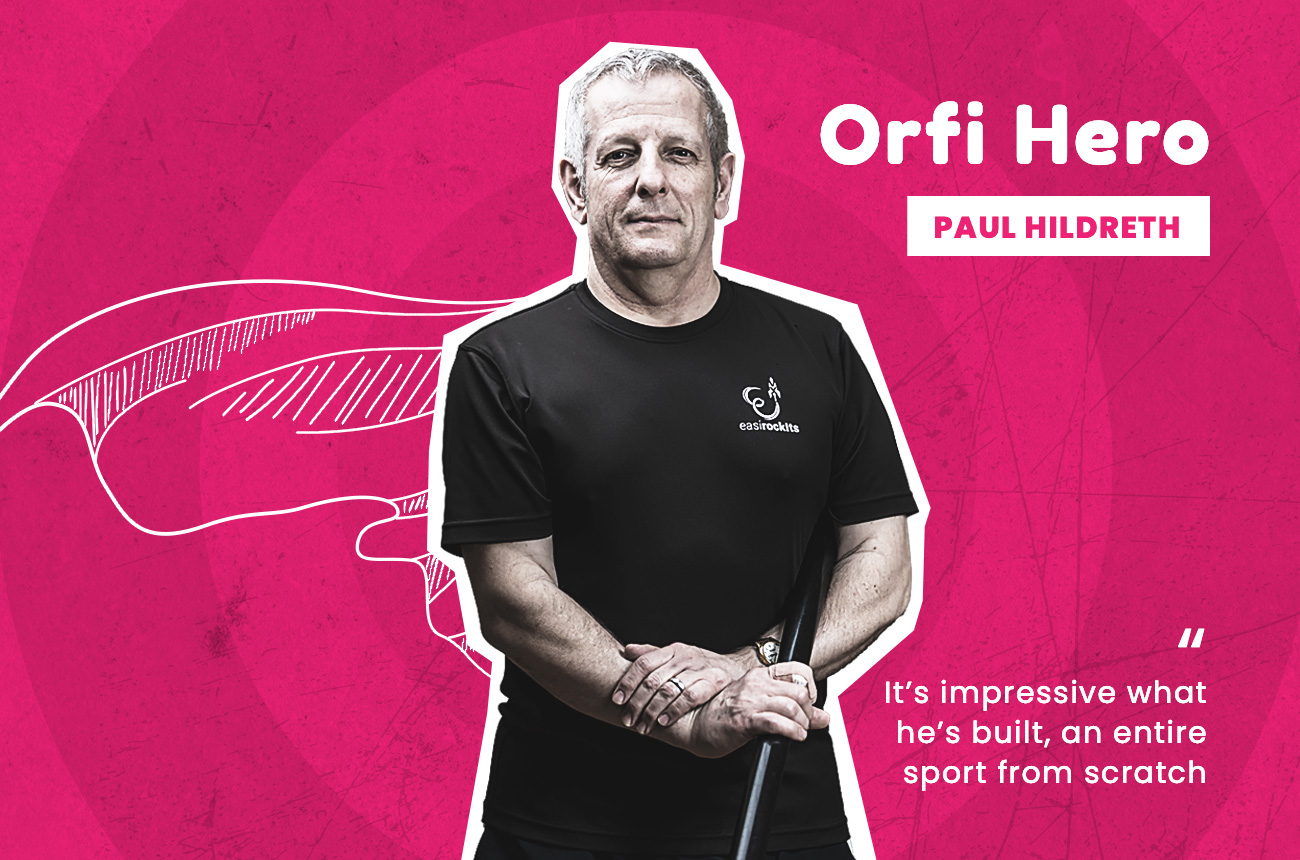 Paul is responsible for founding the sport of VX, and has helped countless people around the world get more active and healthy. We spoke with his son, Tom Hildreth, to find out more about Paul’s story…

Why did we choose Paul?

When crowning our Orfi Heroes we look for people who have made a significant impact on their community through sport.

In the case of Paul Hildreth, he has created a whole community from scratch, and driven a new sport from just a concept to being played throughout the world.

“He does it full-time, he doesn’t take any money from the sport, any money that he makes he just ploughs right back in,” his son, Tom, who also works within VX and is a former world number one and World Cup winner.

“He’s very loyal, and he would do anything for anyone. He has a massive workload, he’s busy all day every day, but if people ask anything of him or need help he’ll give up his time without a thought. He’s running clubs and sessions or he’s working in the office, but he’ll never say no to anybody.

“I couldn’t have done it, I don’t know how he has done it! It’s so impressive what he’s built, an entire sport from scratch really.

“The dedication and drive that he’s got to work all day everyday and take nothing for himself is amazing. He’s just done it for the sport, with this vision for it that he has because he sees how it affects people.

“He just wants to carry on pushing it further.”

Well, built from “a little lacrosse, a pinch of pelota, a dash of dodgeball and a hint of hockey”, it’s not like anything you have seen before.

Using a VX stick which is roughly comparable to a double-ended lacrosse stick, players propel low-pressure tennis balls at each other’s bodies, with one point gained for a hit and three if you catch an opposition shot in your stick.

Played in an enclosed area – in which players roam anywhere, rather than either side of a boundary as in dodgeball – the sport is fast-paced and fuelled by adrenaline.

Where does VX come from?

“VX doesn’t stand for anything – it’s symbolic,” Paul told us.

“It’s a team game, two teams of five, so V represents five players on each side, and the X represents the total number of players on a court.

“We also have a singles game, played on a squash court, so we call that V2 – two players. And then we have a doubles game, four players on the court, that’s V4.

“Now in algebra X can represent any number, so that indicates we have all these different versions, so then V stands for versatility. It’s all symbolic.he future hold for VX?

The future of VX

The sport is growing, and not just in England either.

Already the sport has spread from Ripon, Yorkshire, to the US, Australia, Uganda and Hong Kong.

Last year’s World Cup was hosted here in England, with countries from all over the world travelling to come and take part.

So what is it that’s attracting VX such global attention?

“It’s got an impact like nothing I’ve ever seen before,” said Paul.

“When people hear it described they’re interested but when they see it, when they play, oh wow. They’re hooked.

“And its four cornerstones are honesty, integrity, sportsmanship and respect. It is a game of honour, and we’re very, very keen on the element of honesty.

“And after all that, the most important thing is it’s fun too.”

Orfi Active are delighted to welcome Paul as our very first Orfi Hero, and look forward to working with him more in the future. There are already VX sessions on our app, so if you are interested in trying out the sport for yourself, we’ve got you.