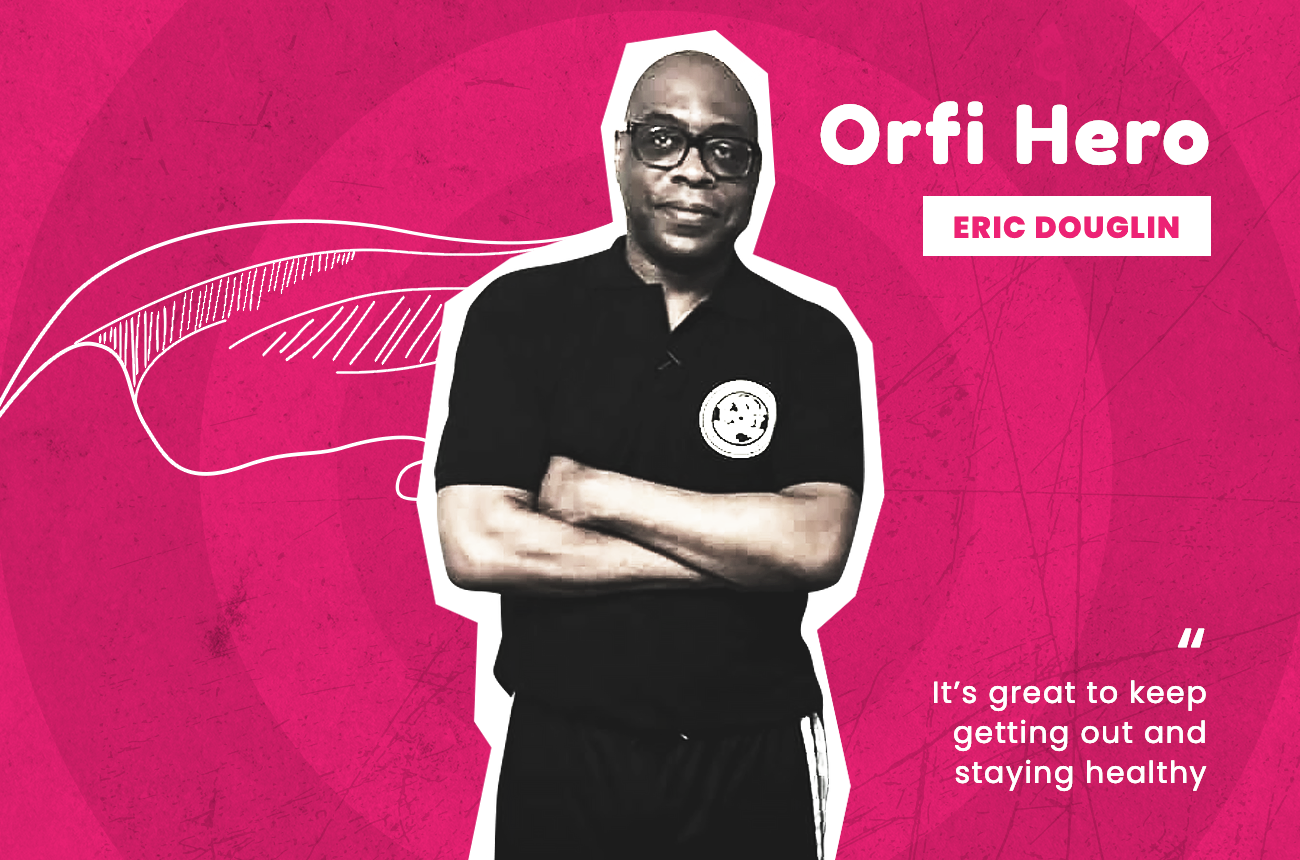 Earlier this year, we launched our Orfi Heroes campaign.

We looked to recognise the amazing work that people around the country are putting in to ensure others can enjoy sport.

It’s a pleasure to announce our second hero, Eric Douglin.

Eric inspiringly battled back from kidney disease to set up the World Club Basketball Tournament UK, which has events reaching as far as the USA.

Here is his story.

“Before every game or tournament I give a little speech just to say ‘look, if my wife hadn’t given me that kidney, we wouldn’t be here today’.”

When Eric Douglin talks about the kidney donation he received from his wife when he was just 46, it is in a matter-of-fact voice which conceals the inspirational nature of his story.

Before his illness he was already giving his spare time to run a local basketball club in his native Bexhill, Sussex – committing himself to developing “young boys into men”.

But after his diagnosis, he went into overdrive.

10 years ago (15/01/2010) I was given a life saving kidney transplant from my wife Mandi. This #GiftOfLife enabled me to lead a full and productive life, watching my children & grandchildren grow. #Forevergrateful #GiftofLife #OrganDonation #KidneyDonorRecipient #KidneyRecipient pic.twitter.com/1q7bxxY3SF

He created the World Club Basketball Tournament – the self-styled “largest international basketball tournament in the country”.

And as if that wasn’t impressive enough, he has worked endlessly to raise funds and awareness for kidney research, something he admitted he has been “very successful” in, with no show of false modesty.

“I now do speeches at various events and at schools as well about the importance of keeping fit and healthy, looking after yourself and also that if you have a critical illness, like kidney disease or cancer or anything else, it doesn’t have to stop you from doing what you do,” he told Orfi.

“Your life doesn’t stop. I’ve spoken to a lot of patients who’ve had kidney transplants and they think that after the transplant that’s it, their life’s over.

“But that’s not true, it’s just about keeping healthy. It’s great to keep getting out and staying healthy, and because basketball is my baby, that’s what I do.”

Douglin, now 53, described how people approach him to ask about kidney disease – in his own words “it’s silent, no one knows about it”.

And while his work so far to raise awareness has been admirable, he knows there is still plenty to do.

This is serious. Find out how you can keep your kidneys healthy. Click our bio link #WorldKidneyDay #KidneysMatter #KidneyDisease #kidneyFailure #kidneys

“There’s a lot of connections that are being made between kidney research and sports activities,” he said.

“Kidney transplants only last on average about ten to 12 years, so there’s the chance that I’ll need a second donor at some point.

“And I have four children and four grandchildren, the likelihood of one of those needing a kidney is higher as well, as the disease I have may be congenital.

“So I can’t rest on my laurels and say “you know what, I’ve got my kidney, thank you very much and goodnight”. My kids may well need one. Anyone I know might need one.

“So the emphasis is on to keep raising awareness. And that’s what I intend to do.”

A love for basketball

Basketball has been something of a lifelong love for Douglin, starting during his school days and being continued by his three sons.

It was through his boys that he began his coaching career, initially as a favour to their coach, before he set up his own club, Bexhill Giants.

From there, a desire to provide more than a court to play on led to him touring with his squad in Europe, first in Mallorca and then for three years at the World Youth Friendship Games in Holland.

“It was a really good club and I really enjoyed it. But I wanted to make basketball more of an experience, rather than just going out and playing,” he explained.

“They were fantastic experiences, they made the guys grow up into men.

“And that’s where my mindset has always been, to do something different with basketball, thinking outside of the box to help the guys develop as young men.”

It was a desire to provide his Bexhill Giants team with quality competition, alongside memories of their own touring experiences, that led to the inaugural World Club Basketball Tournament in 2015.

Now in its fifth year, it is growing fast, with teams from Britain, America and Canada being joined by others from across Europe and Asia – not to mention teams from Pakistan, Tunisia and Malaysia who missed out.

“I was surprised that so many different teams wanted to come over to play basketball in this country, it blew me away,” said Douglin.

“And the calibre of players these teams were bringing was immense, players who had played at the top level around the world.

“The thing is, a lot of players coming out of the American college system may not make it into the NBA, so then they have to look for opportunities elsewhere, often in Europe.

“So my tournament is becoming known worldwide as an opportunity for players to showcase themselves and get a foothold in Europe. They’re seeing how big the tournament has got.

“Last year we had ten teams, and I must have turned away ten or 15 teams who wanted to get involved.”

As a Sussex Sports Awards volunteer of the year winner in 2018 and unsung hero finalist in 2019, it’s clear that Eric’s passion for sport has been felt by many.

It’s a pleasure to have Eric as our newest Orfi Hero and to tell his inspirational story.

Hey Orfi Crew. _ We’re on the search for Orfi Heroes. If you know someone that has inspired you to take up a new sport, or has achieved an incredible feat of charity or volunteer work, then we want to hear about it. So if you think you know a potential Orfi Hero, let us know. 🙌 #inspiration #rolemodel #unsunghero