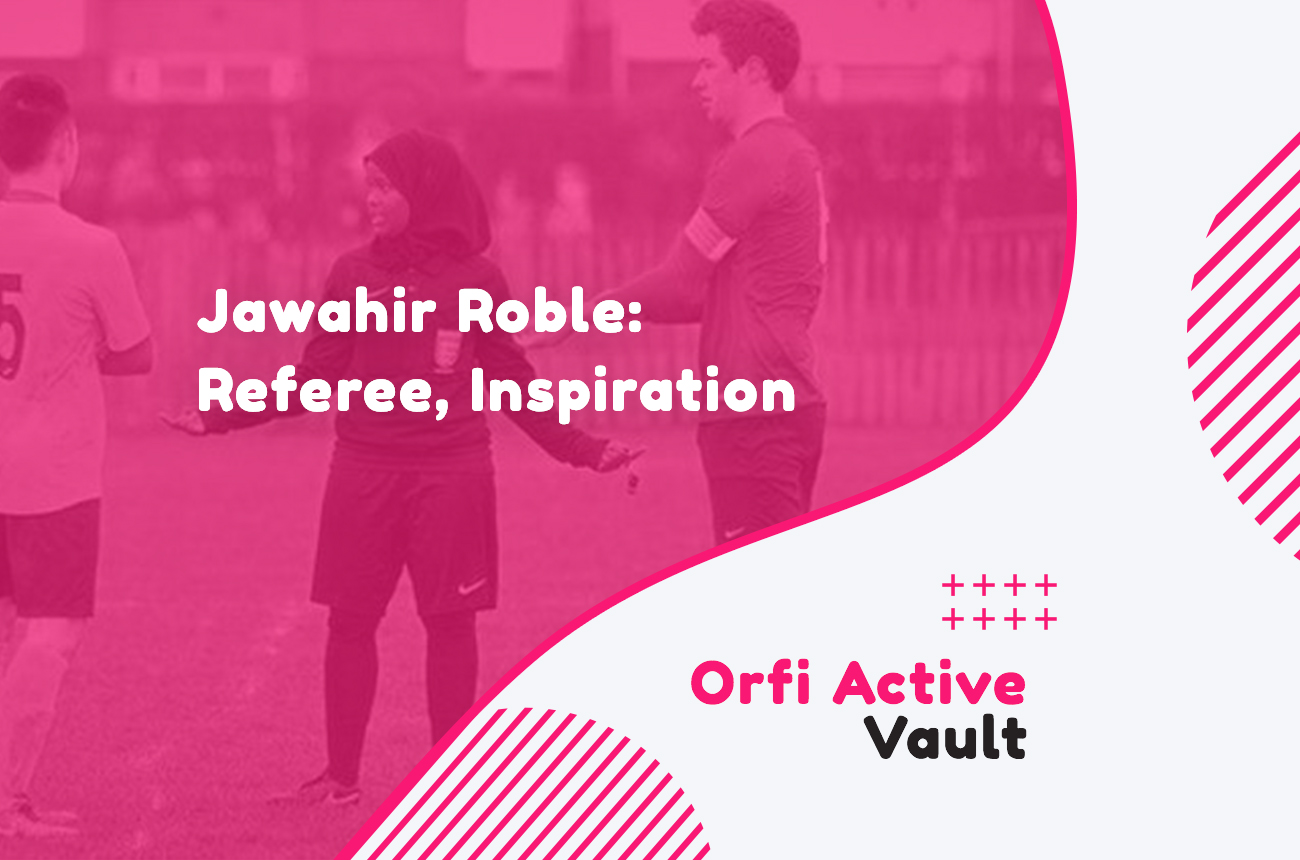 Orfi Active is more than just an app for organising and finding sports and fitness events – we want to use our platform to persuade people that active is for everyone. And that’s been our aim for years, stretching back to our time as Hoops Connect, when we interviewed famous and inspirational figures from the world of sport to communicate this message. So, we’re digging through the vaults to republish some of our favourites.

JJ is a football referee. She’s also a Muslim woman of Somalian descent who takes to the pitch in a hijab. She’s an FA Youth Leader, and a volunteer with racism in football charity Kick It Out and football education charity Football Beyond Borders. A recent article in the Telegraph described her as “the most remarkable referee in England”. We caught up with her to hear her story.

Can’t believe I used to be scared of weight lifting. I enjoy it so much now. Thanks to my awesome trainer @nez__healthhub #niketraining 💪🏽💯

JJ, thanks for taking the time to speak to us, especially now you’re something of a celebrity! A feature in the Telegraph and everything?

People have been coming up to me like “yeah, JJ you’ve made it!” I’m like “it’s just a story guys, calm down!”

So many people have contacted me, you know those people on Facebook that you haven’t spoken to ever? They’ve been popping up…

It’s nice, it’s nice. Nice to be recognised for something you love.

I can imagine! Where did it all start then, why do you love football?

My family all love football, it’s just that I’m the one who took it too far!

We always played football in the garden, in the house, outside, everywhere man.

My parents were like “oh my God, these girls are embarrassing us and our family, they need to calm down!”

I always remember being involved in football, I don’t remember a point when I thought “this is it, I want to work in football”. It’s just always been there. And now to do it as a profession is big.‍

Have you managed to win your family around now?

My dad has always supported me.

And I’m like “of course I haven’t let you down, hello?”

But I showed him the article in the Telegraph and he’s been round showing it all his friends, I know he’s proud.‍

What is it that drew you into refereeing?

Refereeing isn’t easy, but when you do it well you get respect.

The things you hear about referees getting bullied, getting abuse – I don’t get that. I would say that you get a lot of respect, and I’d encourage more and more women to do it.

You need to earn the respect, definitely.

Players can get frustrated easily if you don’t know the rules of the game. You need to put in a lot of effort, and your fitness has to be on point.

But all the respect is coming out now. I like refereeing.‍

You don’t fit the stereotypical image of a referee… has that made things harder do you think?

When I’d turn up they’d all raise an eyebrow, definitely.

I’d be walking up – usually two minutes late because I had to take public transport! – and the managers would be talking, the players would be looking around, thinking I’m some assistant or something.

But I just turn up in my kit and I’m like “hello, I’m your ref, sorry I’m late but captains please, let’s get started!”

Of course they’re surprised to see a Muslim girl refereeing! I’m kind of short as well so they’re like “okay, what is this child doing here…”

But I take charge, I show them what I’m about, I just say “listen, I love this game as much as you do, you respect me and I’ll respect you, let’s do this!”

‍Thankfully, the spotlight is being shined on racism in football by organisations like Kick It Out now. Have you ever been subject to abuse?

Na, na, na I’ve never had anybody get racist with me.

Well just one, back in the day when I was reffing a youth match, I didn’t hear it, one of the parents overheard another parent saying something discriminatory.

I could have done something but I don’t like paperwork so I was just like na, I’ll let this one slide…

There’s been a really positive reaction to your story since it came to public attention. What does it feel like being a role model?

The way I look at it, if people see my story it can inspire them, because if I can do it, they can do it too.

People sometimes just want that one story to push them towards doing what it is they want to do. Who could ever think a Muslim girl would be refereeing men’s football?

You just have to push things sometimes, and do your thing. I just want to motivate people to follow their dreams.

People say to me “JJ you’re sick you” and I’m like “yeahhhhh”! You hear these buzz words, “role model” “inspiration” “motivation”. You hear them, but I’m actually feeling that now.

People need people. I like being a role model.‍

What’s next in the JJ story?

I want to keep pushing my coaching and my refereeing.

I’m looking at doing my EUFA B licence in coaching, and I’m working on my Level 6 in refereeing – I just want to keep going, pushing forwards as much as I can.

There’s a female referee in the German Bundesliga – if she can do it in men’s football, why can’t I?

But my target is the women’s game. Come on England Lionesses! I watch so many of their games.‍

And finally, what advice would you give to anybody out there who wanted to get involved in sport but was nervous or reluctant, maybe due to a fear of racial or sexist discrimination?

I’d say start off very small and just work on it.

You should never worry about what other people are going to say. It’s all in your head, “oh no, what’s that person going to say, they’re going to judge me, no, no, no…”

Just get out there and do what you love doing, because you could be the next big story! Not doing something because of what someone else might say is just an excuse.

Wow, that’s such a hard question, you know! I’d say just do your thing. Do your thing and don’t worry about what anybody says. No matter what level you are in life there will always be haters.

You shouldn’t care what anyone says, you just ignore them and do your thing.