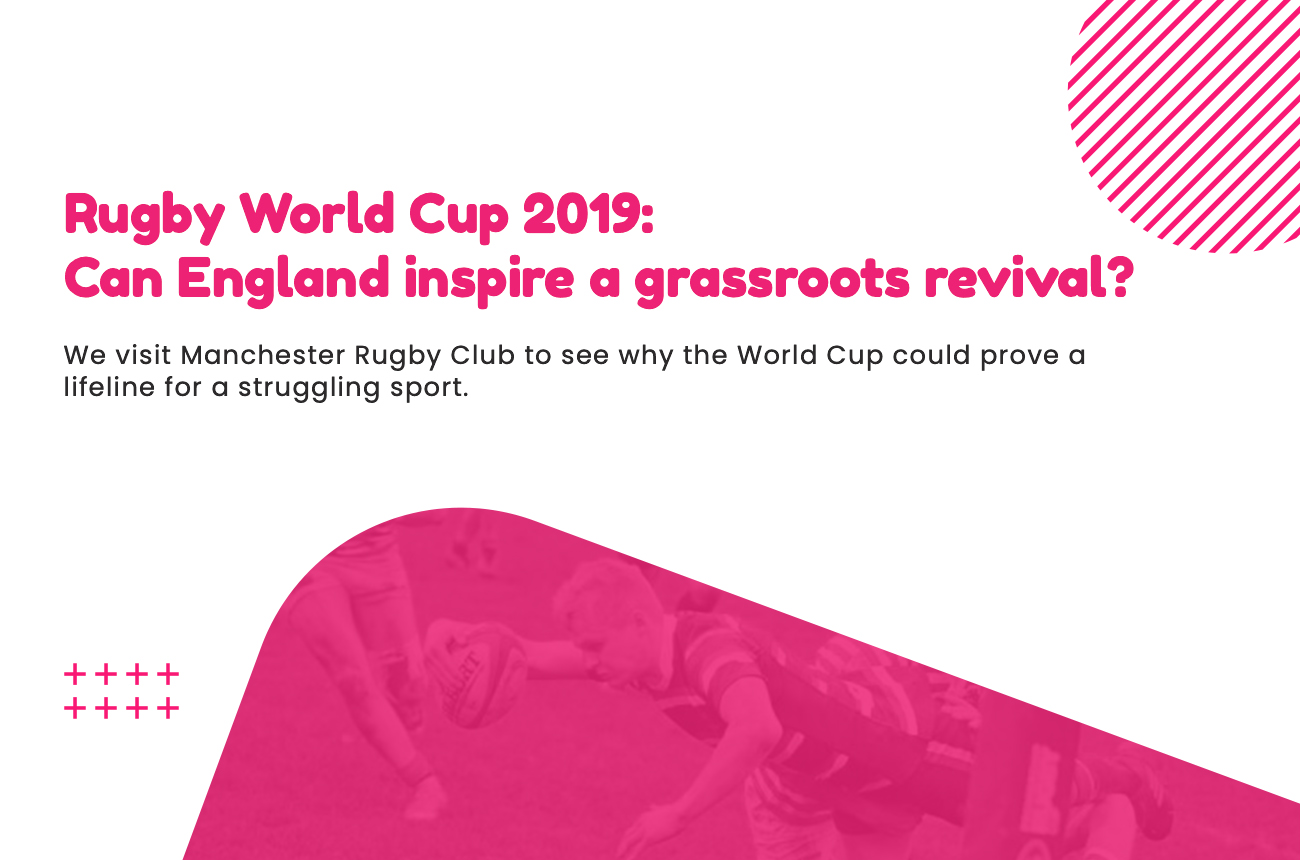 The Rugby World Cup is almost underway, and we couldn't be more excited.

While early morning fixtures may replace pints in pubs with tea and toast, the potential for daily world class rugby has created a buzz around the nation.

But what impact will the World Cup have on grassroots clubs back home in England?

Previous sporting events such as the 2012 London Olympics and the 2019 FIFA Women’s World Cup have boosted sports participation in England dramatically, with Sport England declaring that after the Olympics, 750,000 more people played sports at least once a week.

This is something that grassroots rugby clubs across the country will be hoping to replicate this autumn. Clubs such as Manchester Rugby Club, who are one of the oldest in the country. Founded in 1860, they predate the RFU, England rugby's governing body, by 11 years.

However, a rich and successful history hasn't stopped them from falling into trouble in recent years.

Timothy Harper is a former chairman at Manchester and has been involved in rugby for over 30 years. Recent struggles haven't deterred his passion for the game, because for Tim, rugby is about more than just creating good players.

Had a great day down at Manchester Rugby Club. The World Cup influence has been massive. Saw 100s of enthusiastic kids playing rugby and all very knowledgable. Brilliant day

“It’s about putting something back into the community and developing good people,” he told Orfi Active.

“Some players stay with us from the age of three to the senior level – it’s seeing those people develop both as rugby players but also developing them as individuals, that add to the community.

“But unfortunately there's a lot more distractions now, which I think has resulted in less people at a senior level getting involved in rugby. At under-16s they begin to drift away.

“Whatever it is, at that age boys get distracted with exams, girls and all the rest of it. So we are struggling as a club to run our teams. And then you have the challenge of the ones that stuck with you going to university.

“We had a semi-professional team, and then unfortunately the money ran out, things happened and we ended up with the Guinness world record for the senior rugby team with the most consecutive losses – we lost 87 games in a row.

“At one stage we had seven or eight teams, now we’ve got two or three. It is a struggle to keep three teams going, other clubs around here have lost their third.

“Last year we really struggled with the thirds and in the end we had to pull them out of the league.”

"Dying on its feet" or better than ever?

Maintaining a consistent and competitive group of players has become a real issue for Manchester.

Unfortunately, this is also the case for many other local clubs. Chris Adams, secretary at Blaina RFC, described grassroots rugby as “dying on its feet”, while Statista reports that participation in rugby union by 11-15-year-olds has fallen from 22% in 2010 to just 14% in 2018.

All of which suggests a countrywide decline in participation of grassroots rugby, particularly from teenagers.

Nevertheless, there is a sense for Tim that things are improving.

“There's more young kids involved here at Manchester than there ever has been,” he explained.

“We’ve got over 20 kids involved in each age group from under-6s to under-16s.

“We encourage those going to university to keep in touch. We invite them to come back to the club at Christmas and we have a friendly game between university boys and current players.

“The best way to do it is to keep them involved with the club even when they are away.

“Women’s rugby is growing too, and we have touch rugby going during the summer which has hopefully created new players.”

"You hope they out of the group stages..."

These extra measures to keep hold of young players appear to have paid off for Manchester, but Tim hopes that a successful World Cup will raise the profile of rugby further.

However, England’s recent World Cup campaigns could not be more varied.

“I hope they win it and I hope it raises the profile of grassroots rugby,” Tim said.

“The last World Cup didn’t have as big or positive an impact as you’d think, it was a bit of a disappointment the way we went out at the group stages.

“Generally when England games are on, this place is pretty full, we post on social media to encourage people to come down.

“You’d hope that we get out of the group stages. I don’t think England are a consistent team but if they hit a streak they’ll do well.”

How Orfi Active can help

With grassroots rugby in a period of uncertainty, it seems that a successful World Cup could be a huge boost for struggling clubs across the country.

But at Orfi Active, we don’t want active lifestyles to rely solely on the success of high profile sporting events.

Instead, our app intends to solve the problem faced by clubs like Manchester.

“I think anything out there that encourages people to come back to the game or start the game is positive,” Tim said.

“I think clubs have to embrace social media. We are putting a bit out there on our Facebook and we've got a Twitter page.

“So anything that encourages people to get in touch with us is a positive.”

With World Cup anticipation in full swing, let's hope that England can go all the way in Japan and bring it home for a second time.

Tim, Manchester and other grassroots clubs will be cheering for victory, with the extra incentive that success for the national team will bring some added attention to grassroots rugby.

Orfi Active is in app stores now, just search for our name in the Apple and Google Play stores. We're currently planning and preparing for our full launch, so keep your eyes peeled.